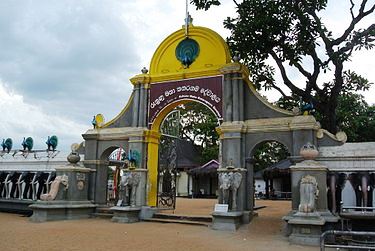 Kataragama (Sinhalese: කතරගම (katharagama), Tamil: கதிர்காமம் (katirkāmam)) is a pilgrimage town sacred to Buddhist, Hindu and indigenous Vedda people of Sri Lanka. People from South India also go there to worship. The town has the Ruhunu Maha Kataragama devalaya, a shrine dedicated to Skanda-Murukan also known as Kataragamadevio. Kataragama is in the Monaragala District of Uva province, Sri Lanka. It is 228 km ESE of Colombo, the capital of Sri Lanka. Although Kataragama was a small village in medieval times, today it is a fast-developing township surrounded by jungle in the southeastern region of Sri Lanka. It houses the ancient Kiri Vehera Buddhist stupa. The town has a venerable history dating back to the last centuries BCE. It was the seat of government of many Sinhalese kings during the days of Rohana kingdom. Since the 1950s the city has undergone many improvements with successive governments investing in public transportation, medical facilities, and business development and hotel services. It adjoins the popular Yala National Park.

During the historic period, the general area was characterized by small reservoirs for water conservation and associated paddy cultivation. Kataragama village is first mentioned in the historical annals known as Mahavamsa written in the 5th century CE. It mentions a town named Kajjaragama from which important dignitaries came to receive the sacred Bo sapling sent from Ashoka’s Mauryan Empire in 288 BCE.
It functioned as the capital of number of kings of the Ruhuna kingdom. It provided refuge to many kings from the north when the north was invaded by South Indian kingdoms. It is believed that the area was abandoned around the 13th century.

Based on archeological evidence found, it is believed that the Kiri Vehera was either renovated to build during the first century BCE. There are number of others inscriptions and ruins. By the 16th century the Kataragamadevio shrine at Kataragama had become synonymous with Skanda-Kumara who was a guardian deity of Sinhala Buddhism. The town was popular as a place of pilgrimage for Hindus from India and Sri Lanka by the 15th century. The popularity of the deity at the Kataragama temple was recorded by the Pali chronicles of Thailand such as Jinkalmali in the 16th century. There are Buddhist and Hindu legends that attribute supernatural events to the locality. Scholars such as Paul Younger and Heinz Bechert speculate that rituals practiced by the native priests of Kataragama temple betray Vedda ideals of propitiation. Hence they believe the area was of Vedda veneration that was taken over by the Buddhist and Hindus in the medieval period.

Temple of Syncretism
Kataragama is a multi-religious sacred town as it contains an Islamic Mosque within its temple complex as well.
In spite of the differences of caste and creed, many Sri Lankans show great reverence to God Kataragama. They honor him as a very powerful deity and beg divine help to overcome their personal problems or for success in business enterprises, etc., with the fervent hope that their requests will be granted. They believe that God Kataragama exists and is vested with extraordinary power to assist those who appeal to him with faith and devotion in times of distress or calamity.

Buddhist Kataragama
Many Sinhala Buddhists of Sri Lanka believe that Kataragama deviyo is a guardian deity of Buddhism and he is the presiding deity of Kataragama temple. Kataragama is one of the 16 principal places of Buddhist pilgrimage to be visited in Sri Lanka. According to the chronicle of Sri Lankan history, the Mahawamsa, when the Bo sapling of Bodhi Tree, under which Gotama Buddha attained enlightenment in North India was brought to the city of Anuradhapura 2,300 years ago, the warriors or Kshatriyas from Kataragama were present on the occasion to pay homage and respect.

The Bo tree behind the Kataragama temple is one of the eight saplings (Ashta Phala Ruhu Bodhi) of Sri Maha Bodhiya in Anuradapura, Sri Lanka. This tree was planted in the 3rd century BC.

The Buddhist Kiri Vehera Dagoba which stands in close to the Kataragama devalaya was built by the King Mahasena. According to the legend, Lord Buddha, on his third and the last visit to Sri Lanka, was believed to have met King Mahasena, who ruled over the Kataragama area in 580 BC. It is said that King Mahasena met Lord Buddha and listened to his discourse. As a token of gratitude, the Dagoba was built on that exact spot where it now stands. Thus the local Sinhalese Buddhists believe that Kataragama was sanctified by Lord Buddha.