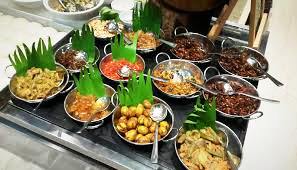 Here are 12 foods you could try whilst in Sri Lanka

For fish ambul thiyal, a large firm fish, such as tuna, is cut into cubes before being sauteed in a blend of spices and dried goraka, a small fruit that gives the dish a sour flavor.

Sri Lanka is famous for making sumptuous use of local fruit, such as coconut and jackfruit, seafood and an utilising a wealth of spices.

Fish ambul thiyal (sour fish curry)
As you’d expect from an island in the Indian Ocean, seafood plays an important role in Sri Lankan cuisine. Fish ambul thiyal (sour fish curry) is one of the most beloved varieties of the many different fish curries available.
The fish — usually something large and firm, such as tuna — is cut into cubes, then sauteed in a blend of spices including black pepper, cinnamon, turmeric, garlic, pandan leaves and curry leaves. Perhaps the most important ingredient is dried goraka, a small fruit responsible for giving the fish a sour flavor.
Ambul thiyal is a dry curry dish, meaning all the ingredients are simmered with a small amount of water and cooked until the liquid reduces. This allows the spice mixture to coat each cube of fish.
Originating in southern Sri Lanka, it’s available throughout the country at restaurants that serve curry, and is best eaten with rice.

Kottu (also, kottu roti)
Over the traffic and noise at a Sri Lankan market, you’ll likely hear the clanking of metal on metal and know kottu isn’t far away. Kottu is Sri Lanka’s hamburger — everybody’s favourite go-to fast food when craving something tasty and greasy.
It resembles fried rice, except instead of rice, it’s made with a type of roti known as godamba roti (a flat, crispy bread).
The roti is normally fried at the beginning of the day, piled into stacks and served as it’s ordered. When you place an order, the kottu chef will fry and chop the roti with a selection of ingredients you choose. The result is a tasty mixture of salty pieces of fried dough, lightly spiced and extremely comforting.
Kottu is served with spicy curry sauce, which you can either use as a dip or pour over your entire plate.
Some of the most skilled kottu chefs compose their own unique songs, singing while they rhythmically clank their spatula and knives against the metal frying surface, slicing the roti with each clank.

Kukul mas curry (chicken curry)
Simple to make, chicken curry is a common household dish in Sri Lanka. There are many variations depending on region and taste preferences.
Spices like fennel seeds, cardamom, cloves and cinnamon sticks are tempered in hot oil before being combined with chicken and spices like chilli powder, curry powder, turmeric, pandan leaves, lemongrass and curry leaves.
Coconut milk contributes to the rich base of the curry gravy. Depending on the recipe, a puree of tomato is often included.
The chicken is stewed for an hour or so until the essence of the spices is infused into the chicken. Most satisfying when served with hot rice and roti.

Parippu (dhal curry)
Parippu, or dhal curry, is the most common curry in all of Sri Lankan cuisine, a staple in any restaurant or household. Masoor dhal (split red lentils) are first rinsed and boiled until soft.
In a separate pan, a number of fresh ingredients, such as onions, tomatoes and fresh green chillies, are sauteed and mixed with tempered spices like cumin seeds, turmeric, fenugreek, mustard seeds and curry leaves.
All the ingredients are combined and usually thickened with a splash of fresh coconut milk to give the dhal a rich flavor and creamy texture.
It goes with everything, but is perfect as a dipping gravy for a fresh roti or paratha.

Lamprais
Sri Lanka has been influenced by a diversity of cultures and one of the most evident is the Dutch Burgher community.
Lamprais, a word that combines the two Dutch words for “lump” and “rice,” is a combination of meat, rice and sambol chilli sauce, wrapped into a banana leaf packet and steamed. The rice is cooked with meat stock — usually a combination of different meats like beef, pork or lamb — that’s infused with cardamom, clove and cinnamon.
A scoop of rice is placed in the centre of a banana leaf, along with the mixed meat curry, two frikkadels (Dutch-style beef balls), blachan (a shrimp paste) and a starch or vegetable, usually either ash plantain or brinjals.
The package is folded into a parcel and steamed. Since lamprais is a Burgher contribution to Sri Lankan cuisine, the meat is usually prepared with sweet spices like clove and cinnamon, recreating the flavor favoured by the Dutch Burgher community.
Original recipes called for beef, pork and lamb, but chicken and eggs are often included in a modern lamprais packet.

Hoppers (appa or appam)
Also, string hoppers (indi appa or idiyappam)
Hoppers are the Sri Lankan answer to the pancake. The batter is made from a slightly fermented concoction of rice flour, coconut milk, sometimes coconut water and a hint of sugar.
A ladle of batter is fried in a small wok and swirled around to even it out. Hoppers can be sweet or savoury, but one of the local favourites is egg hoppers. An egg is cracked into the bowl-shaped pancake, creating the Sri Lankan version of an “egg in the hole.”
Egg hoppers are garnished with lunu miris, a sambol of onions, chillies, lemon juice and salt.
Unlike the runny batter used for hoppers, string hoppers are made from a much thicker dough. The dough is squeezed through a string hopper maker, like a pasta press, to create thin strands of noodles, which are steamed.
String hoppers are normally eaten for breakfast or dinner with curries.

Polos (green jackfruit curry)
Jackfruit is consumed in a number of different stages of ripeness, from very ripe and sweet to green and starchy. Polos is a Sri Lankan curry prepared with young green jackfruit.
The fruit is sliced into bite-sized chunks and boiled until soft.
It’s then cooked with onions, garlic, ginger and spices like mustard seeds, turmeric, chilli powder, roasted curry powder, pandan leaves and curry leaf sprigs. The final step is to add coconut milk and simmer to reduce most of the liquid, leaving all the beautiful flavors within the cubes of jackfruit.
Jackfruit has a starchy texture, somewhat similar to cassava or potato. Polos is a standard dish available at most Sri Lankan curry restaurants.

Wambatu moju (eggplant/brinjals pickle)
Served mostly with rice and curries, wambatu moju is an extremely flavorful candied eggplant (brinjals) pickle.
The eggplant — usually the purple-skinned, long and slender variety — is cut into bite-sized wedges and deep fried, giving the eggplant a crispy texture with a soft and silky interior.
It’s then caramelised with a spoon of sugar, vinegar, red onions, green chillies, mustard seeds, chilli powder and a hint of turmeric powder until the colour turns almost black.
Take a bite and the soft and juicy texture of the eggplant should melt in your mouth — the slightly sweet, sour and salty contrast is absolutely sensational.

Gotu kola sambol (pennywort salad)
One of the most readily available green vegetable dishes in Sri Lanka is gotu kola sambol.
Gotu kola (known in English as Asiatic pennywort) is a medicinal herb in Asia. It’s shredded into slivers, then combined with shallots, tomatoes, fresh grated coconut and chilli and seasoned with a dressing of salt, pepper and lemon juice.
Sambol is a term used in Sri Lanka for ingredients that are combined and eaten raw, sometimes more of a chili sauce and sometimes more of a salad, like gotu kola sambol.
Gotu kola has a powerful, herbaceous flavor similar to kale, making it an extremely fresh and crisp dish. It’s typically a side dish served with curry and rice.

Kiribath with lunu miris (Milk Rice)
Kiribath is a special type of rice, cooked with thick coconut milk and often served during special or auspicious occasions, such as Sinhalese New Year.
There are a few versions of kiribath, but the basic procedure is to start by boiling a pot of rice.
Before the rice finishes cooking, add coconut milk and a pinch of salt. The coconut milk makes the rice creamy and rich and helps it form a sticky consistency. Once the rice is finished cooking, it’s cut into wedges and served like slices of cake.
Kiribath can be eaten along with a number of different Sri Lankan dishes, often either sweetened or consumed salty with chili sauce or curry. One of the most common ways to garnish kiribath is with lunu miris, a sambol chilli sauce made from red chillies, onions, lemon juice, salt and sometimes dry Maldive fish, all ground into a paste using a stone mortar and pestle.

Pol Sambol (coconut relish)
In a country in which the coconut is of supreme importance, there’s one Sri Lankan side dish that pays fitting tribute.
Pol sambol, which might also be called fresh coconut relish, is a simple blend of finely grated coconut, red onions, dried whole chillies or chilli powder, lime juice, salt and Maldive fish (if available). The ingredients are diced or ground, then combined in a bowl.
In Sri Lanka, pol sambol is used as a garnish or side dish for everything and anything.
It goes well with rice and curry, pol roti (coconut roti), a hot paratha, string hoppers or even just scooped up with slices of bread. If you love coconut, there’s no better garnish in the world.
Sri Lanka’s top tea experiences: Sips of history

Wood apple
It wouldn’t be a Sri Lankan food discussion without wood apple.
The wood apple is a Southeast Asian fruit about the size of a de-husked coconut. It also has just as hard of a shell, and a pungent, almost blue cheese aroma.
Walking through a market in Sri Lanka your nose will detect it long before your eyes do. Inside the shell is a dark brown paste that resembles something between tamarind pulp and fermented raisins.
Wood apple can be eaten directly out of the shell, but one of the most popular ways to eat (or drink) it throughout Sri Lanka is in a thick smoothie, known as wood apple juice.
The fruit is blended with sugar and water to smooth it out. It has a unique sour and sweet flavor. Mention that you love wood apple to any Sri Lankan you meet, and they probably won’t be able to hold back a knowing smile.

Be adventurous and enjoy!

Sri Lanka is an awesome tropical island with steady temperatures generally remaining between 25°C and 35°C. There are windy and rainy seasons […]

Surfing Sri Lanka - The Best Places to Learn to surf