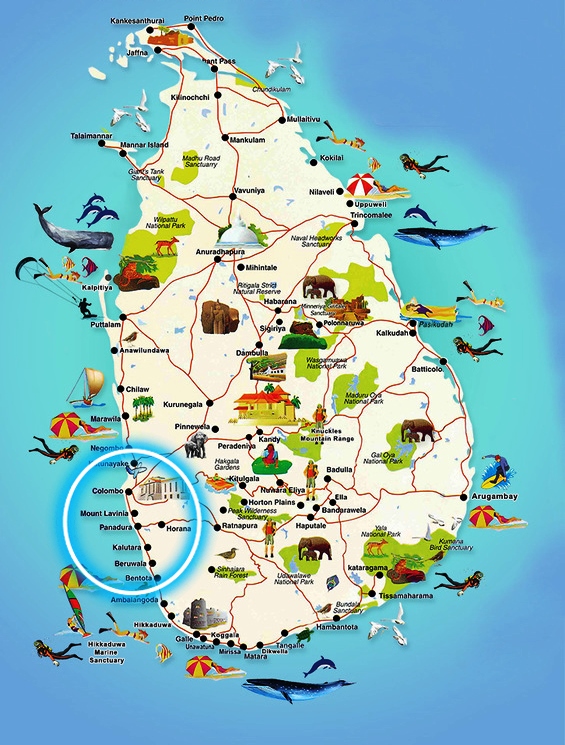 It is also the administrative capital ofKalutara District. It is located approximately 40 km (25 mi) south of the capital Colombo.

Once an important spice-trading center, the town’s name is derived from the Kalu Ganga River (‘Black River’ in native Sinhala). In the 11th Century, the town was temporarily made a capital on the orders of a South Indian Prince. The region was later planted with coconut trees, whose by-products are used for both internal and external trade. The location also boast fortifications (Kalutara fort) dating back from the times when Portuguese, Dutch and British vied for control of the area.
The 38 m (125 ft) long Kalutara Bridge was built at the mouth of the Kalu Ganga River and serves as a major link between the country’s western and southern border.

Kalutara District is located in the south west of Sri Lanka and has an area of 1,598 square kilometres (617 sq mi).

Kalutara or Gangatilaka Vihara built in the 1960s to the south of the Kalutara Bridge, is Kalutara’s most dominant landmark. The white 3 storeys-high dagoba at Kalutara Vihara is believed to be the only Buddha Stupa in the world which is entirely hollow. It contains a smaller dagoba inside. The interior of the Stupa is decorated with paintings of the Jataka tales about the life of the Buddha.

Kalutara Bodhiya is one of the most famous sacred and devotional Buddha Buddhist sites in Sri Lanka. It is one of the 32 saplings of Anuradhapura Sri Maha Bodiya.
Kalutara Bodiya is located on Colombo-Galle road.

Richmond Castle a two storey mansion, built in 1896, at Palatota. Richmond Castle is a 42-acre fruit garden estate, originally built for a wealthy regional governor. The architecture is a mix of British and Indian styles, copied from the plans of an Indian Maharaja’s palace designed by a London architect. The entire building is characterized by intricate carvings.

Calido beach is a popular beach among tourists due to its natural beauty and scenic views. It is a thin strip of preserved land which runs between the Kalu River and the Indian Ocean.

Kalutara Beach is one of country’s finest beaches. It is only one hour drive from Colombo

Road
Kalutara is located on the A2 highway connecting Colombo, via Galle through to Wellawaya via Matara. As a result a large number of bus services pass through the town. It is the main point for bus routes in Kalutara district.

Good things to see and do in Sri Lanka