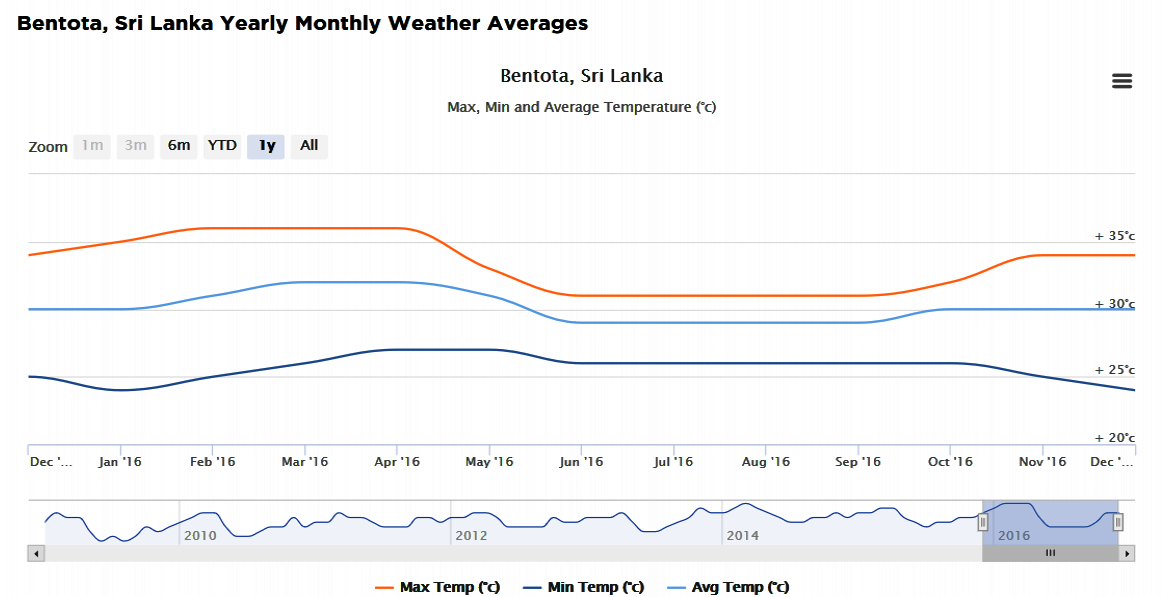 Weather trends on the south west coast of Sri Lanka

Weather trends on the south west coast of Sri Lanka has a tropical climate governed by monsoon winds. It is warm, around 30°C in the day, and can be humid in between heavy rain showers. Rainfall is generally quite high with two distinct peak rainy seasons.

Bentota’s location within the southwest coast put it first in the path of the monsoon winds as they first arrive bringing fresh sea winds to Sri Lanka.

These winds originate in Africa and pick up moisture as they travel on their ocean passage of the Indian Ocean.

Rainfall peaks at the beginning and end of the season when almost 400mm can fall in a month.

Flash flooding may occur on some low lands but not the higher grounds. The storms are usually strongest in May when humidity is also at its highest for the year.

There is a lull in rainfall in July and August. Rainfall during these months is less frequent however it can come in heavy rain showers.

Temperatures fall slightly throughout the season, starting at an average high of 30°C in May and working down to 28°C in October. Night time temperatures fall from the mid to the low 20s but high humidity means this can still be uncomfortable at times outside.

Throughout the period a daily average of six hours of sunshine can be enjoyed per day as clouds often linger in the sky until they give up their rain to the lush forest areas.

The sea temperature drops pleasantly in July and September to delightful 27°C.

The monsoon rains recede but are noticeable in the rivers of Bentota and its surrounding regions. Rainfall levels feeding the rivers remain high. Squalls, sudden, strong wind may be experienced.

As the monsoon winds are from the northeast keeps Bentota and “Down South” dry with calmer seas, which make this ideal for surfing and watersports..

There are clear skies and extra hours of sunshine each day making this an ideal destination to enjoy the outdoors.

The average high temperature maintains a mid day high of around 31°C from February till March.

Lower humidity gives this tropical island a delightfully pleasant climate for the “Down South” season.

As the southwest monsoon winds begin to return, rainfall starts to increase, usually falling in evening thunderstorms with some spectacular thunder storms visible out at sea.

While rain is the dominant feature of the weather, the brevity of these storms means that a great deal of sunshine is to be enjoyed.

Outside of the peak rainfall months, rain comes as a pleasant relief providing a seaside tranquility for flowers and trees.

Visiting this exquisite tropical island that is Sri Lanka, revitalize your soul, with some wearher acclimatisation helpful but not necessary.

Some humid days are a small price to pay for the exotic landscape and contrast in culture when compared other climatically challenged destinations.

So, pack your folding brolly and enjoy all that Sri Lanka has to offer.

Unawatuna is a lovely beach location on the south coast, Sri Lanka, wonderful for snorkelling and diving as well as relaxation and […]