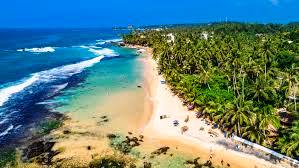 Unawatuna is a lovely beach location on the south coast, Sri Lanka, wonderful for snorkelling and diving as well as relaxation and evening beach parties. Quiet and unique, pleasantly informal compared to it’s neighbour Mirissa where the energetic parties are.

Unawatuna is a known for its beach and corals and only 5 kilometres from the city of Galle with it’s castle walls. Unawatuna is situated at an elevation of 5 metres (16 ft) above the sea level.

Home to the endangered and endemic purple-faced langur, an usually shy monkey species that can only be found in Sri Lanka’s forests, where there is protection afforded by the forest cover to preserve this beautiful creature. There is much eco-tourism being developed by the local community promoting a tourist environment and ecology.

“a seashore dotted with thousands of trees, coconuts, and palms dominating, strings of houses and hermitages along the coastline, human beings and superior beings such as Gandharvas, Siddhas, and ascetics, living in them and countless bejewelled celestial nymphs thronging the shore, the coast intermittently visited by heavenly beings, Gods and demons.” according to historical stories.

Unawatuna traces its roots to the great epic Ramayana. In the epic, the monkey-warrior Hanuman was sent back to India to fetch the four medicinal herbs by Jambavan namely, mritasanjeevani, vishalyakarani, suvarnakarani, and sandhani from the Himalayas in order to heal Lakshman who was wounded trying to save the abducted Princess Sita from the demon king Ravana. Hanuman failed to identify these herbs, so he lifted the entire mountain and carried it to the battlefield to try to save Lakshman, but in the process, a chunk of it “fell-down” in the location of the present day Unawatuna, the name of the village derives from “Una-watuna” meaning “fell down”.

In honour of Hanuman, on the harbour end of Rumassala Hill there is a temple built by Japanese monks of the Mahayana sect of Buddhism named the Peace Pagoda.

Unawatuna is rich in its biodiversity with the greatest potential attraction for eco-tourism was the marsh land or mangrove.

Over sixty species of endemic birds, including terns, egrets, herons, sandpipers and kingfishers, as well as rarer species such as the lesser whistling duck, the Asian palm swift, the white-breasted waterhen, the Loten’s sunbird and the black bittern have been sighted in the locality by the ornithologist, Clive Byers. These birds are mostly sighted in the remaining marshy area and Rumassala Hillock.

Off the coast of Unawatuna, beneath the Indian Ocean lies a number of coral reefs, shipwrecks, and a great variety of fish and turtles. The turtles still wade onto the shore to lay their nests and eggs, and at times, as if to lay first claim to the sandy shore now invaded by the tourists and dotted by restaurateurs, even go right into the beach front restaurants .

The Rumassala coral reefs at the east end of the Galle Harbor attract divers. Eco treks in the shrub jungles of Rumassala are also available.

Surfing Sri Lanka - The Best Places to Learn to surf