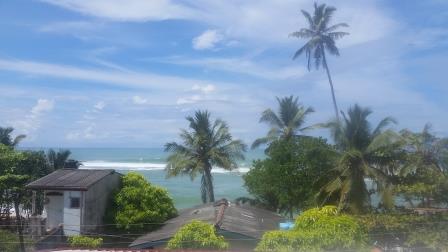 Sri Lanka is a charming tropical island with an opposite east-west monsoon season.

Sri Lanka has two distinct seasons on either side of the island. November to April brings morning offshore winds to the western side, centred around Hikkadua, where beach and reefs dominate.

May to October brings the same conditions to the east centred around Arugam Bay. Here the occasional reef and a profusion of long, sand points offer relatively unchallenging but consistent waves.

The waves here are from the same swells which regularly sweep up the Indian Ocean from the Roaring 40s.

First surfed by Rusty Miller in 1965, this area is a popular leg of many travellers journeys and as such the surf can be crowded at the most popular spots. Sea temperatures remain steady at about 27ºC or 81ºF year-round.